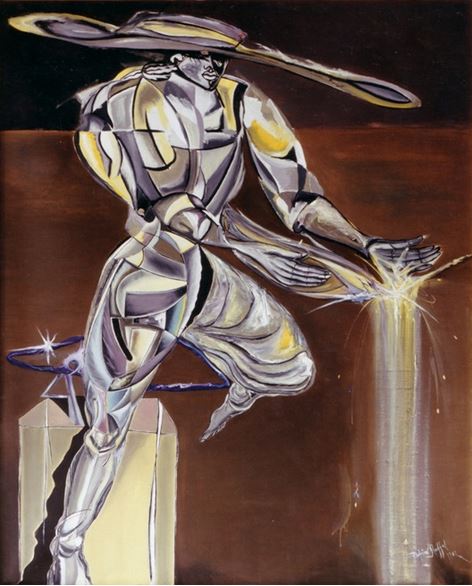 I painted the seed thrower years ago, when I lived in the Touraine. This painting was in fact the Big first sale of my career as a painter. I now consider it the first painting of Trans Nature Art. When I observed it years after having painted it, I noticed red crosses on the seeds thrown by the thrower. A feeling they would one day turn sterile? 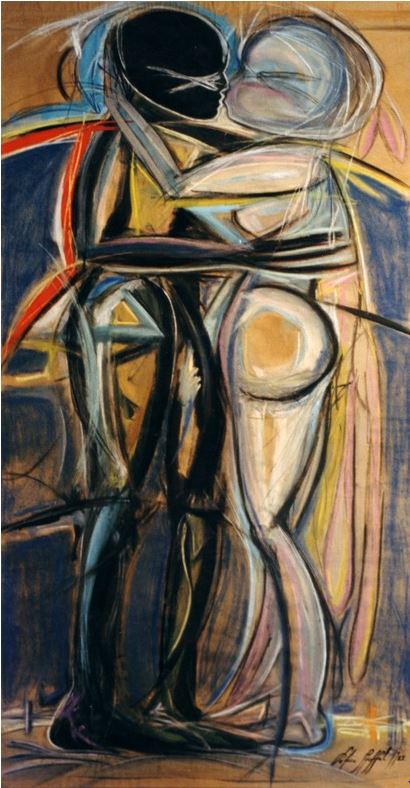 This painting means a lot to me. The light that arises from the state of love gives us faith in what we are. This is the light I represent with The Hug. It found a home with my friend Mark Tate, who talks here about his encounter with it, seated in front of my cosmic painting C19. 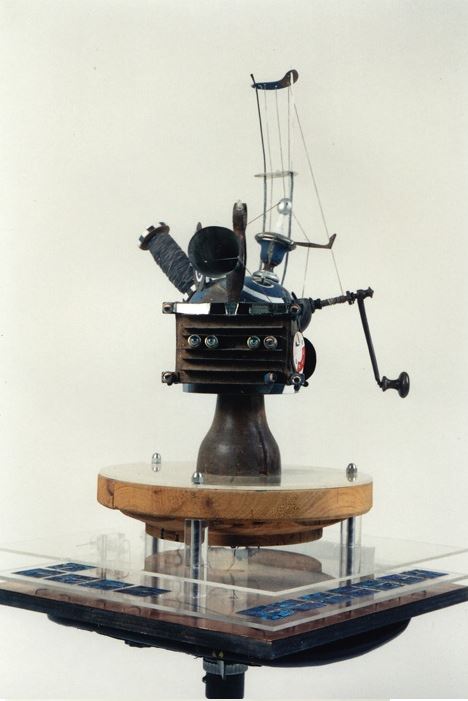 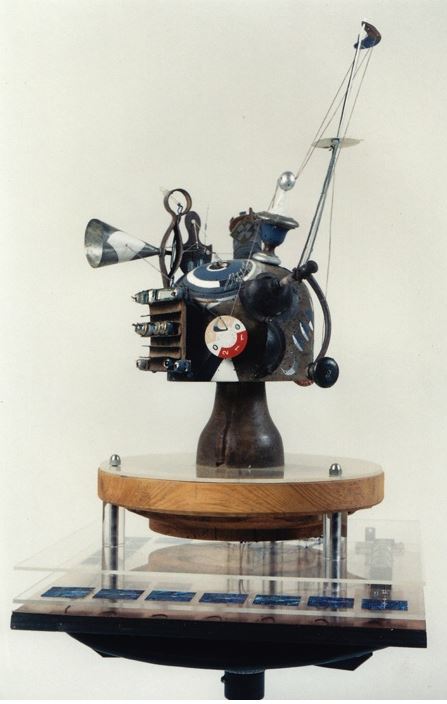 This solar sculpture, made in collaboration with Bernard Gitton, was conceived to live its own life, as an independent element in nature. I talked about it some years ago on French television. I let you discover it in visu. 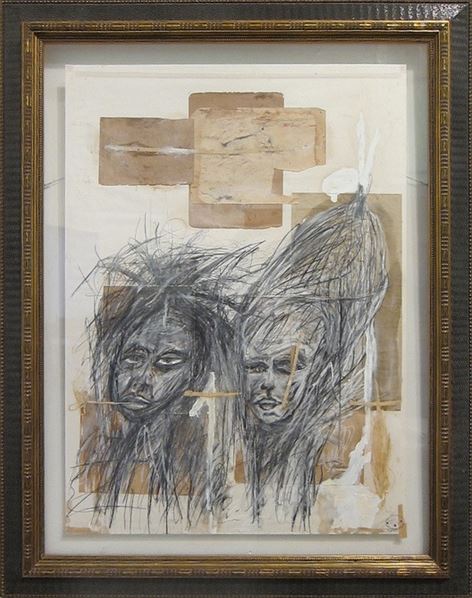 Joseph Beuys is an artist who carried a deep anthropological message, having inspired a modern post war era respectful of the natural cycles. According to his individual mythology, his plane was shot down over Crimea while he was a pilot for the Luftwaffe during World War II. He was found by Tartar nomads who healed him, also giving him a strong sense of collectivity that marked the rest of his life. His concepts inspired me in the early hours of Trans Nature Art. Jean-Michel Basquiat is the youngest African American artist recognized in the United-States. He played a central role in bringing art to the streets by tagging the walls of New York. It’s the Swiss gallerist Bruno Bischofberger as well as the early deceased Thomas Ammann who brought this artist to global light. I shared the same school bench as Thomas Hammann before moving to the United-States. In this painting, I portray my two artistic heroes. I painted this piece in the early hours of Trans Nature Art, in Paris, Rue du Théâtre. 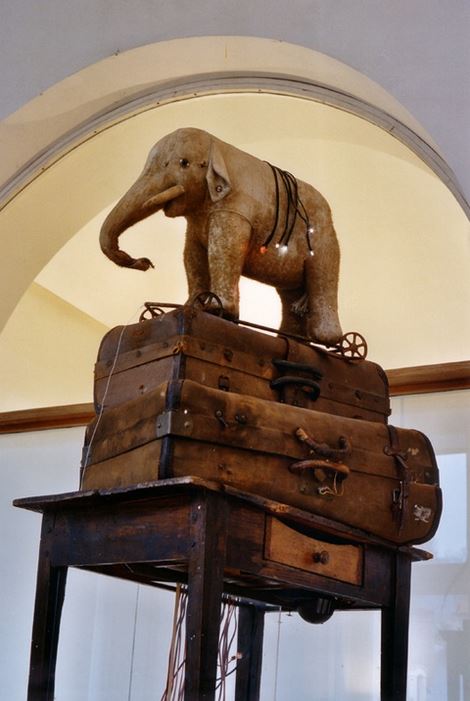 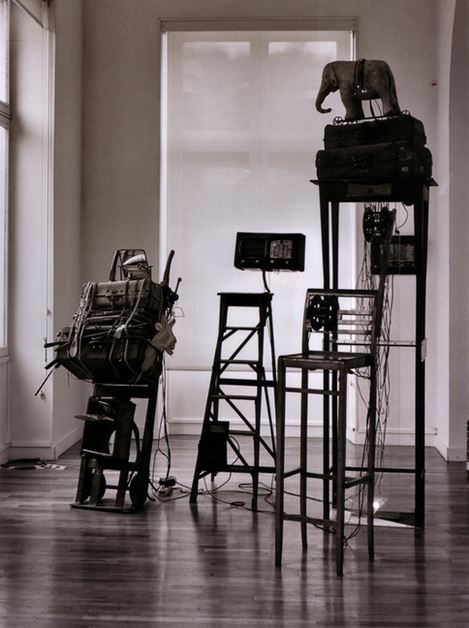 The sculpture, made in collaboration with Bernard Gitton, is composed of four towers (from left to right).

Tower n°1
Rifles and different objects were accumulated in suitcases. These are attached to a hand truck (devil in French). Of course, they represent elephant hunters’ suitcases as we could have found them a hundred years ago. Throughout a century of colonization, elephant hunting was a taboo. After a brief period of protecting them, elephants are being hunted again, specifically with the action of China in Africa: because of their phallic shape, their tusks are used as aphrodisiac powders in Asian countries. Moreover, these tusks represent a first class material for sculptors around the world.

Tower n°2
On top of a very high table, we can see a Stellephant standing on two suitcases. This is the metaphor of elephants having moved to reserves, similarly to Native American Indians. Mankind and elephants need to learn to respect their mutual space. Elephants are pacific animals, but over the last years, many accidents occurred during which elephants attacked African villages, as if they had learnt that Mankind is a danger for them. (There is similar phenomenon occurring with Squids in the Gulf of Mexico.

At the centre of the installation, a transparent panel lit by red diodes blinking sends a message to the viewer: “Stop, and think about this for a moment!”

Tower n°3
This is an interactive sculpture: Two wheels are installed on interrogatory chairs form WWII. When they turn, a magnet placed inside turns two small microphones on, as sensitive as a dog’s ear; inside of which magnetic waves are picked up.

Tower n°4
The electromagnetic waves picked up by the microphones are translated into sound by the computer inside the old radio from the 30s. This gives the elephant the power to trumpet his revolt and claim his right to exist. 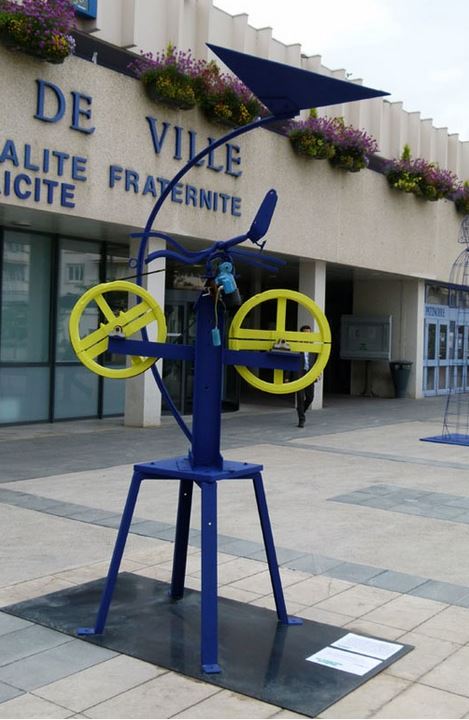 Bees are a fundamental key to nature’s renewal. Einstein himself reminds us that the end of bees means the end of humanity. As already in some countries, peasants rent out trucks loaded with beehives in order to pollinate their fields, that in China, fields are pollinated by hand due to the lack of “natural” bees and that in industrialized countries, bees loose the way back to their hives because of pesticides: let’s make sure we take care of them, in order for them to take care of us and our environment. This sculpture was made in collaboration with Martin Bühler, and runs with an original motor of Jean Tinguely. It found its place in the Touraine, in the collection of the Urban Community of Tours.