You remember the short film Genesis, made in 2011, you will find below and well, I am very proud to announce that it has just won several awards at festivals.

Based on an original story by Stellest

Some mentions with a link for the awards at SFAAF (South Film and Art Academy Festival):

A link for the Paris Film Award:

And here are the mentions for the Hollywood Gold Awards with this link:

It is a brand new version of the clip “Nasha Café De La Paix”, which is the result of a lot of work.

Special thanks toTibor Lörincz, Director of Photography, Editing and Grading.

Starman was in Normandie and tribute to Jim Morrison at the beautiful cemetery “Père La Chaise”, in Paris. This is a few pictures on the beach, in Normandie.

The mask is made by Cécile Kretchmar from Paris. Thanks to her!

I present to you my first music video clip “Nasha café de la paix”. Composed and produced by Stellest, also on guitar and vocals, not to mention Lino on guitar, Fernando Saunders on bass, Bobby surround, Jan Peyer, Irina Mossi, Giulia Singer and Christine Donzel.
The video is produced by Stellest and Tibor Lörincz on camera and editing.

I hope you enjoy the video as much as I enjoyed making it. Other clips are coming on the new Stellest Music Youtube channel, as well as other video footage and interviews.

Here are the first pictures of an animation short film project in working progress with my team for a while. This will release in the coming months. Hope you like it, good evening! Stellest

“Little Sister”, is a sculpture concept I made a short time ago, which has been redesigned and shared with you with several 3D visualizations. It will subsequently be a painted bronze. 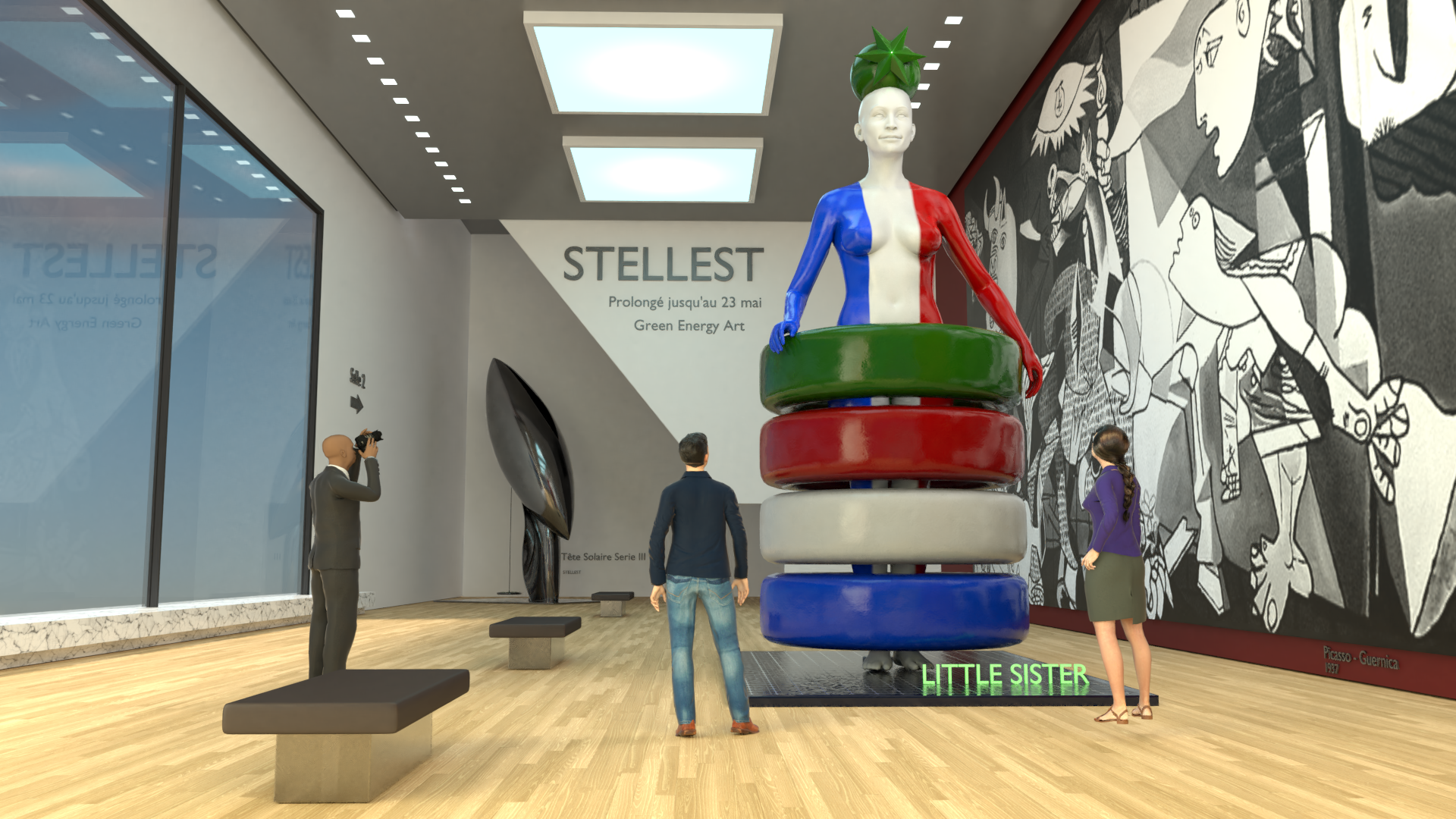 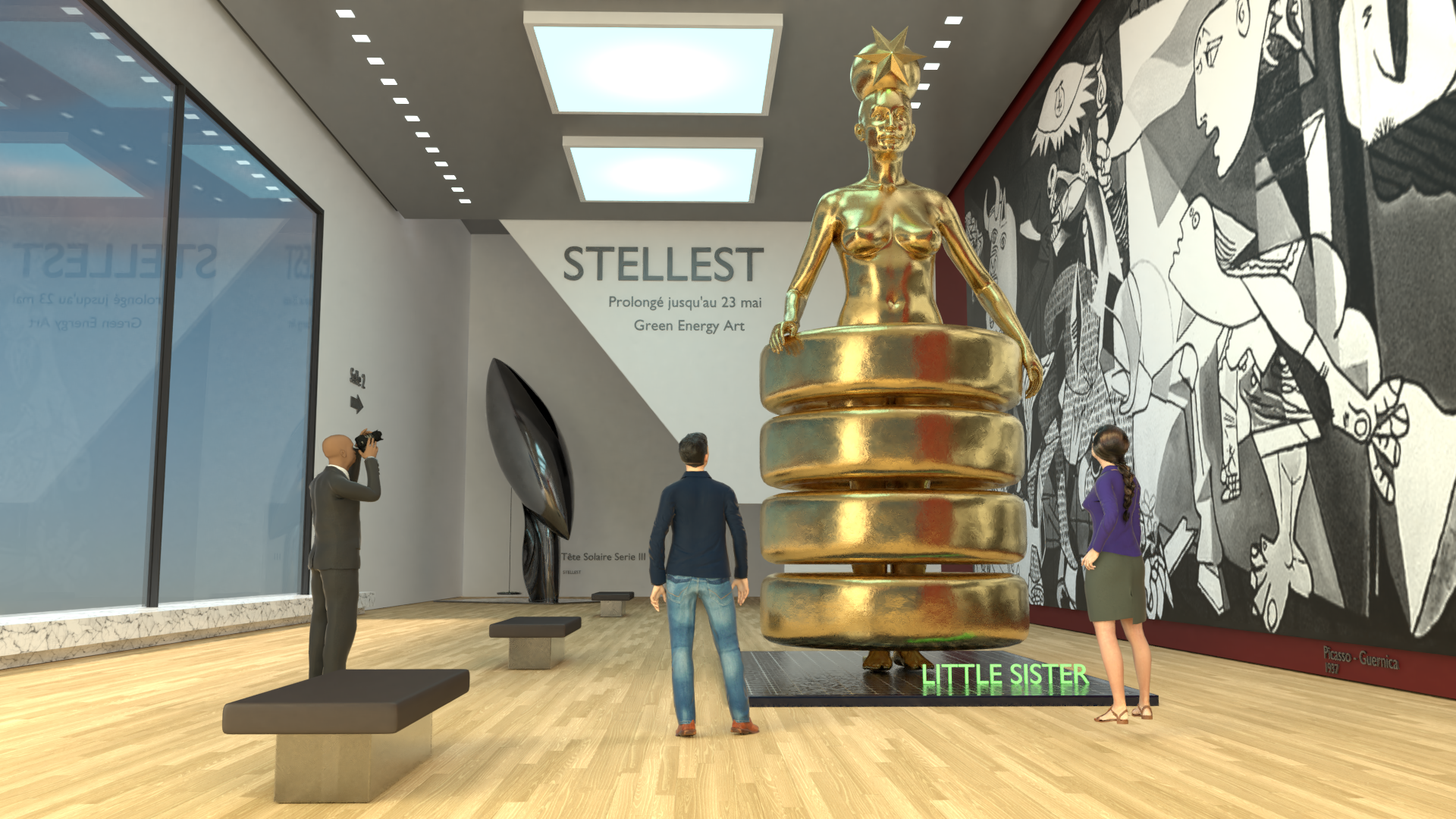 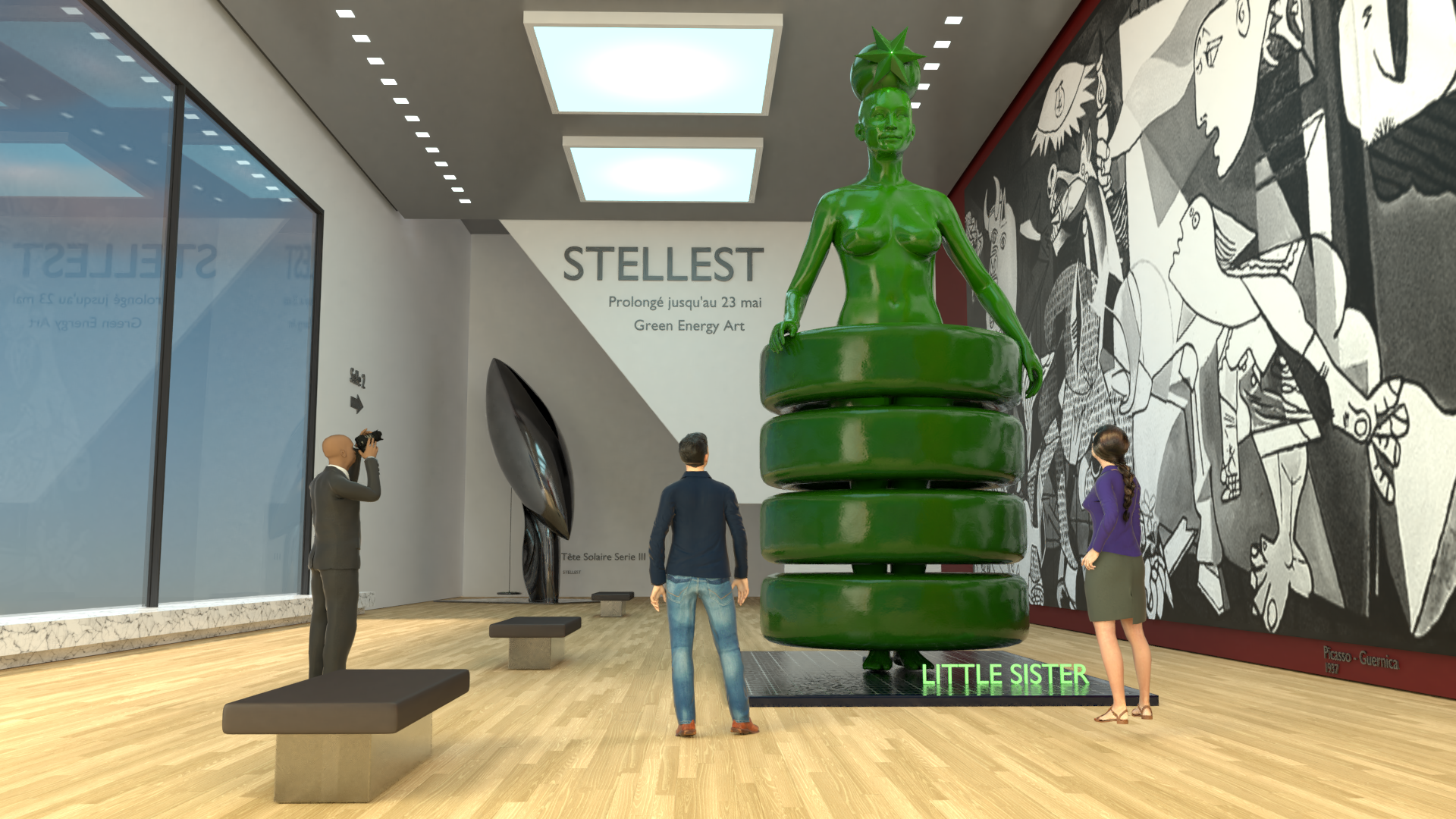 Little Sister_V1 by Stellest on Sketchfab

Little Sister_V2 by Stellest on Sketchfab

A great moment with Martin and Estella Almada in Paraguay.

Martin Almada is a remarkable person who shares my humanitarian vision of ecology and renewable energies. 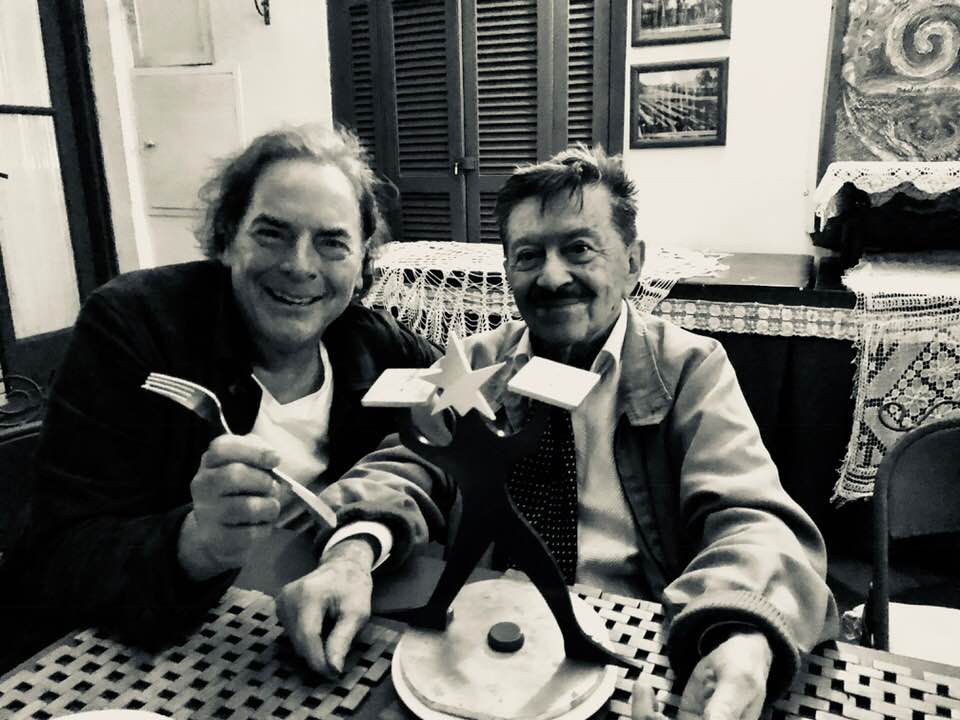 It is a concept of a magnetic disc we are currently on. He will fly above his base and will accompany the sculpture: Solar Head Serie 3.

This short 3D animation clip introduces Renewable Energy Art project (REA) and Trans Nature Art (TNA), born in France in 1992, with the characters Stellest and Steline. They are a metaphor for environmental protection and renewable energy applicable to all areas of life (New World Civilization).
Stellest was a student of Jules Engel at the California Institute of the Arts (Experimental Animation). At the present, Stellest works with Romain Caudron (3D Modeler) in the south of France.

In order to adress obvious climate global warming … The world has to transform urgently to ecological industry based on a renewable energy, production and conception must be in perfect balance.

The idea that you can deregulate  by undoing all security fuses is absurd and irresponsible. It will lead to irreversible and dangerous consequences for the planet.

Given the actual situation on the planet, humanity is obliged to adapt to natures laws… It is a unique chance to develop new energies forgoing further natural disasters…

Eliminating useless confrontation is demanded in order to focus on the one and only problem: “GREEN CLIMATE CHANGE”. 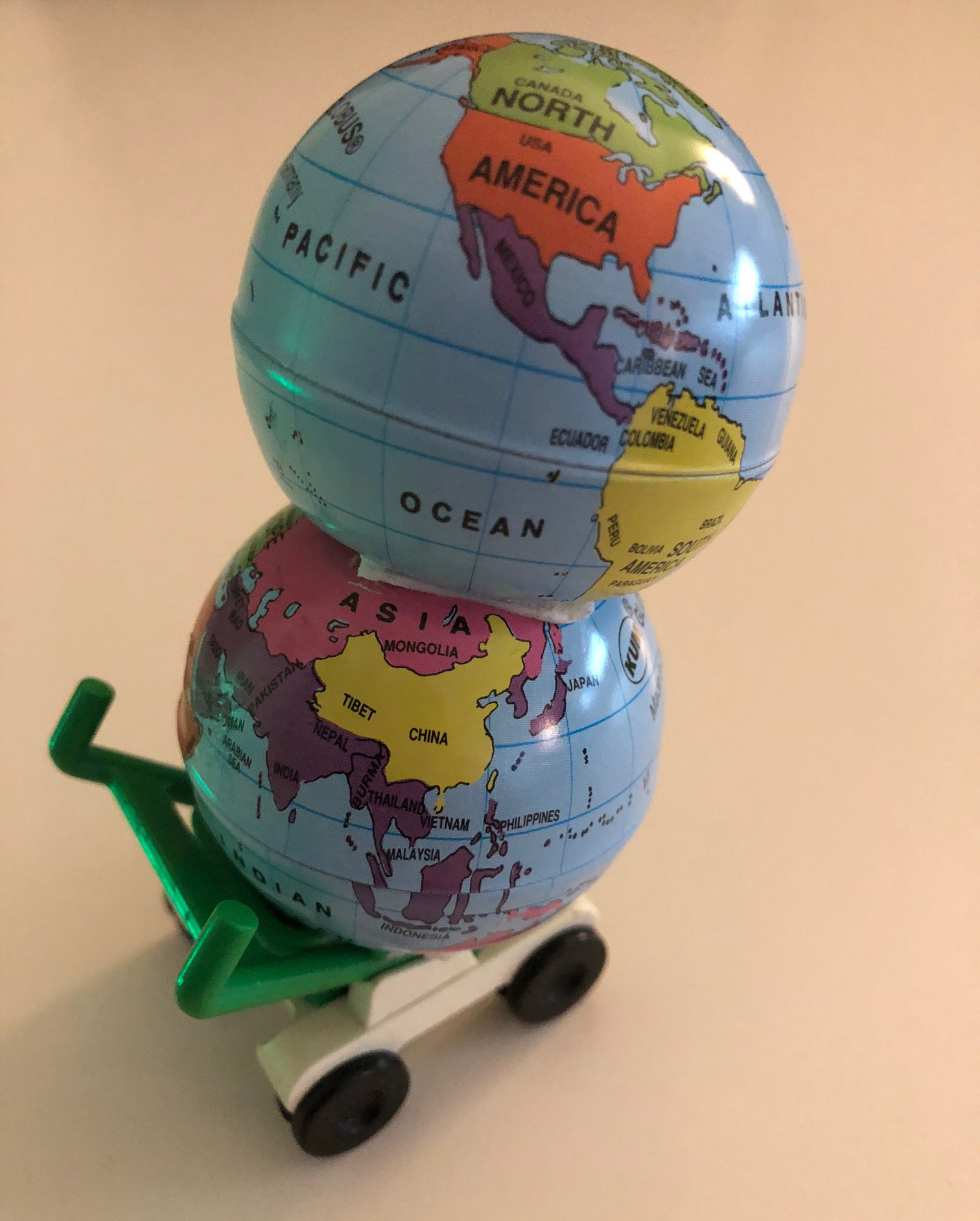